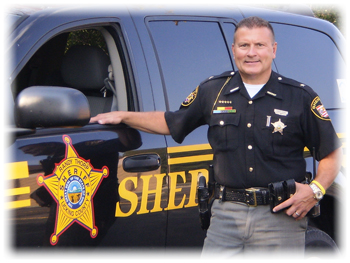 Sheriff Randy Thorp has served the citizens of Licking County since 1983 when he began his career as a Deputy. During his career, Sheriff Thorp served as a Patrol Deputy, Detective, Patrol Sergeant, Detective Sergeant and a Lieutenant in the Detective Division. As a Lieutenant in the Detective Division, he organized and served as the commander and administrator of the highly successful Central Ohio Drug Task Force, a multi-county drug investigation unit. Sheriff Thorp was promoted to Chief Deputy in May of 1997. The citizens of Licking County elected him Sheriff in 2004, and re-elected him in 2008.

Sheriff Thorp is a lifelong resident of Licking County, graduating from Lakewood High School in 1975, the Central Ohio Technical College with an Associate's Degree in Criminal Justice, and from Mountain State University with a Bachelor of Science degree in Police Administration. Since taking office, Sheriff Thorp has worked to strengthen relationships with the community he serves. He has attended numerous law enforcement related schools and seminars for the investigation of violent crimes, drug enforcement, psychological profiling, child abuse, arson, and effective Law Enforcement Management. Sheriff Thorp serves on the Legislative Committee for the Buckeye State Sheriff's Association and the Congressional Affairs Committee for the National Sheriff's Association. He also sits on the Board of Directors for the Buckeye State Sheriff's Association representing the Southeast district for the state of Ohio.

Sheriff Thorp is the region 4 coordinator for the Ohio Homeland Security Law Enforcement Response Plan which encompasses 15 counties in central Ohio. He also serves on the Licking County 911 Steering Committee and has accomplished interoperability of communications by securing funding for new mobile radios for all public safety agencies. Sheriff Thorp is the past president of the Licking County Chiefs of Police and Law Enforcement Administrators Association. He currently serves on the Licking County Community Corrections Committee and is an active member of the American Jail Association and the American Correctional Association effectively leading the Sheriff's Office to reaccreditations by the Commission on Accreditation for Law Enforcement Agencies, National Commission on Correctional Heath Care, and the American Corrections Association.

Sheriff Thorp serves as a chairman for the Central Ohio Technical College Law Enforcement Advisory Panel and has served on the Central Ohio Technical College Alumni Council. He is a current trustee for the Public Health Partnership of Licking County. Sheriff Thorp has successfully developed multiple programs to assist Licking County citizens to include Project Lifesaver, Citizen's Academy, Sexual Predator Awareness, and the S.T.O.P.P.E.D. program. He has also effectively reorganized his staff to meet the needs of this growing community by placing more deputies on patrol and in the detective bureau.

Sheriff Thorp has received several awards and commendations throughout his career. These awards include, the Sheriff's Medal of Honor awarded by the Buckeye State Sheriff's Association and the Governor of Ohio, the Fraternal Order of Police Medal of Valor and the Police Officer of the Year in which he was recognized by the Ohio House of Representatives and the Ohio Senate for putting his own life at risk by pulling a man from a burning vehicle.

Sheriff Thorp resides in Licking County and is a member of various service and civic organizations. He is an active member of our community and enjoys living in and being a part of Licking County.